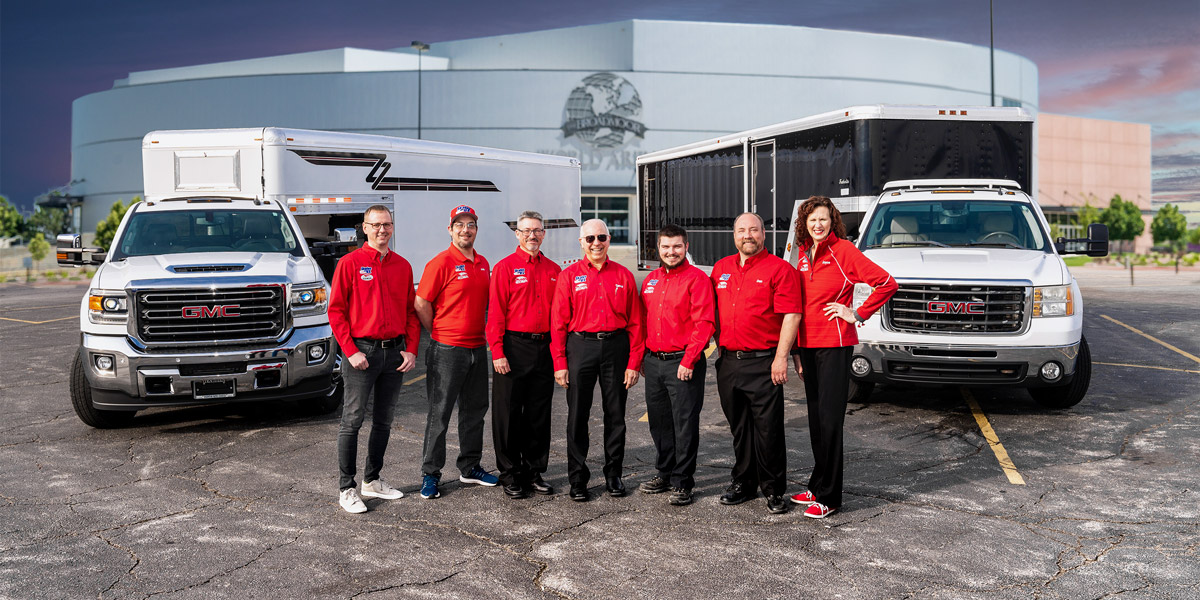 Our experience stems from our president, David Ripp’s vast experience in the skating business. David’s mother was Shirley Snyder and grandfather was Charles Snyder of the famed Snyder Skate Company. David’s innovations with new products as Vice President of the Snyder Skate Company back in the 80’s as well as being a contributing innovator with our current lines, he has had the predominate influence as to where skates are today.

Founded in 2004, we are the U.S. exclusive importers of ATLAS, EDEA Skates, and Roll-Line Skates and Wheels and accessories. These products represent the very best in new technology, comfort, ease of use, ultra light weight, precision, and especially design that we provide you, with the detailed customization of your complete skate outfits to give you the very best performance possible. You won’t believe us, until you put these on your feet and ROLL!

David Ripp, President of Skates U.S., literally grew up at his grandfather’s (Charles Snyder) skate shop in Dayton, Ohio. “When grandpa’s skates became the rage after my mother (Shirley) did so well on them, he left his job as a tool maker at Frigidaire to make the skates full time”.  Charles Snyder is the inventor and held the patents for the Double Action (a Cushion above and below the Truck, which is the Skate Design still most used in today’s Quad Skates) as well at the Toe Stop mount as a part of the Skate Plate.

The Double Action Super Deluxe Model was made for Shirley. However, when David was a competitive skater, he was also skating ice shows, Tests and Competition and wanted a roller skate that responded as quickly as the ice blade. His Grandfather worked with him to develop the Imperial Model skate. David went on to win 13, first, second and third placements at the North American Championships.

David became Vice-President of the Snyder Skate Company in the early 80’s. He invented the click-action adjustment feature that is still used on many skates today. It allows for easy and precise changes to the action of the skates. He travels today for Skates U.S. to competitions and events to promote the skates and boots that “deliver the best possible response for serious skaters”. A quote from the Roller skater’s Gazette Newsletter this past March from Chester Fried says it best, “Many skaters had questions about equipment, and David is, in my opinion, is the #1 expert in knowledge about skates, skating and equipment. He is the “Skate Doctor!”

This brief documentary tells the story of the Skating of Shirley Snyder competing in the 1940’s and Charles Snyder, Lila Snyder, and Shirley Skating Tests and Shows and provides a synopsis of David Ripp’s Roller Skating from age 1 till 1970. 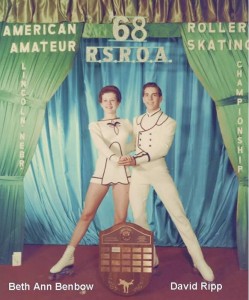 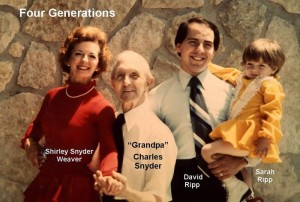 Today, David still coaches when he can and definitely skates regular and dance sessions! 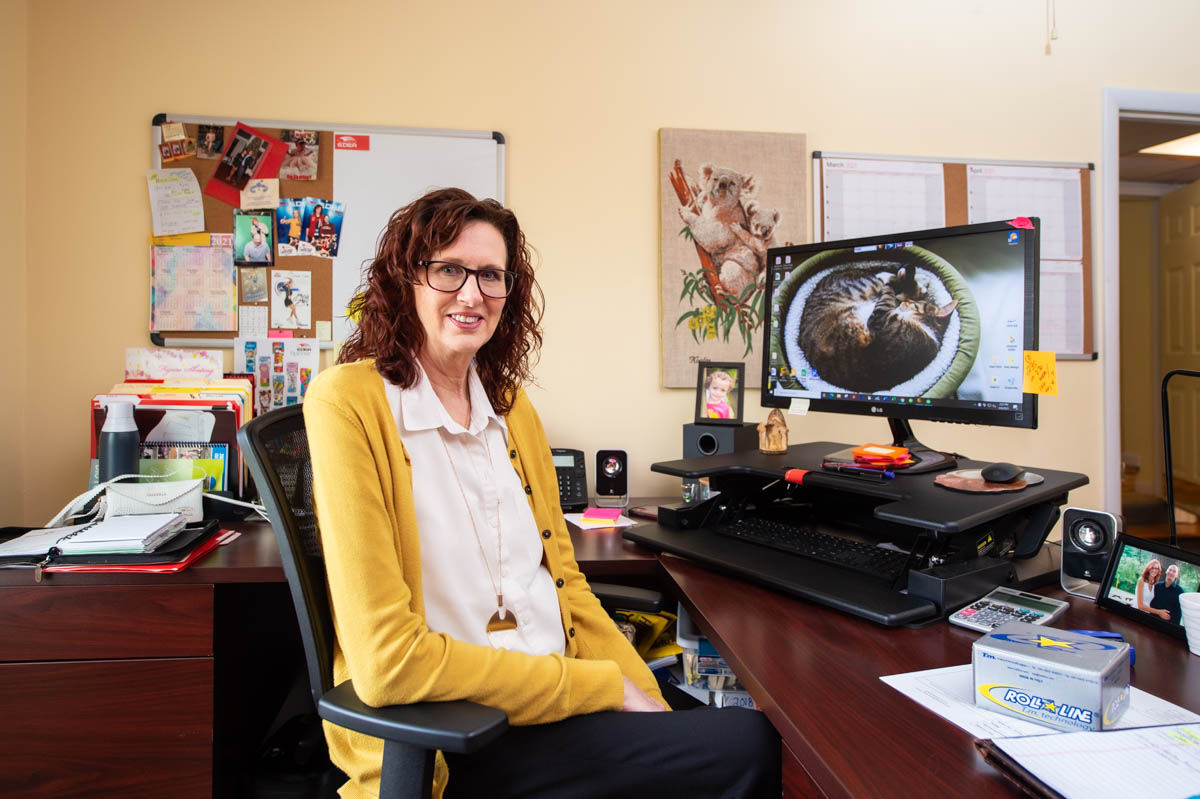 Joyce Brinkley serves as the Personal Assistant to David Ripp, the President of Skates U.S. She

met David and his wife, Carolyn, over 30 years ago when Joyce worked with Carolyn in another business.  (Mary Kay)   When David asked Carolyn to find him a P.A., she hired Joyce away from her then-current job to come work at Skates U.S. Carolyn knew Joyce well enough to understand her varied set of skills and Joyce’s desire to “always figure it out”.

Joyce has multiple interests including sports of all kinds, art, music, theatre, and traveling. She is a voracious reader and reads two to five books during the same time. She enjoys learning new things and continues to study American Sign Language and the Italian language. Joyce’s greatest passion is the culinary arts and cooking brings immense joy into her life.

Joyce thrives on the excitement of being part of the Skates U.S. team as it supports ice and roller skaters, from beginners to the elite, in the U.S.A. and internationally, too. 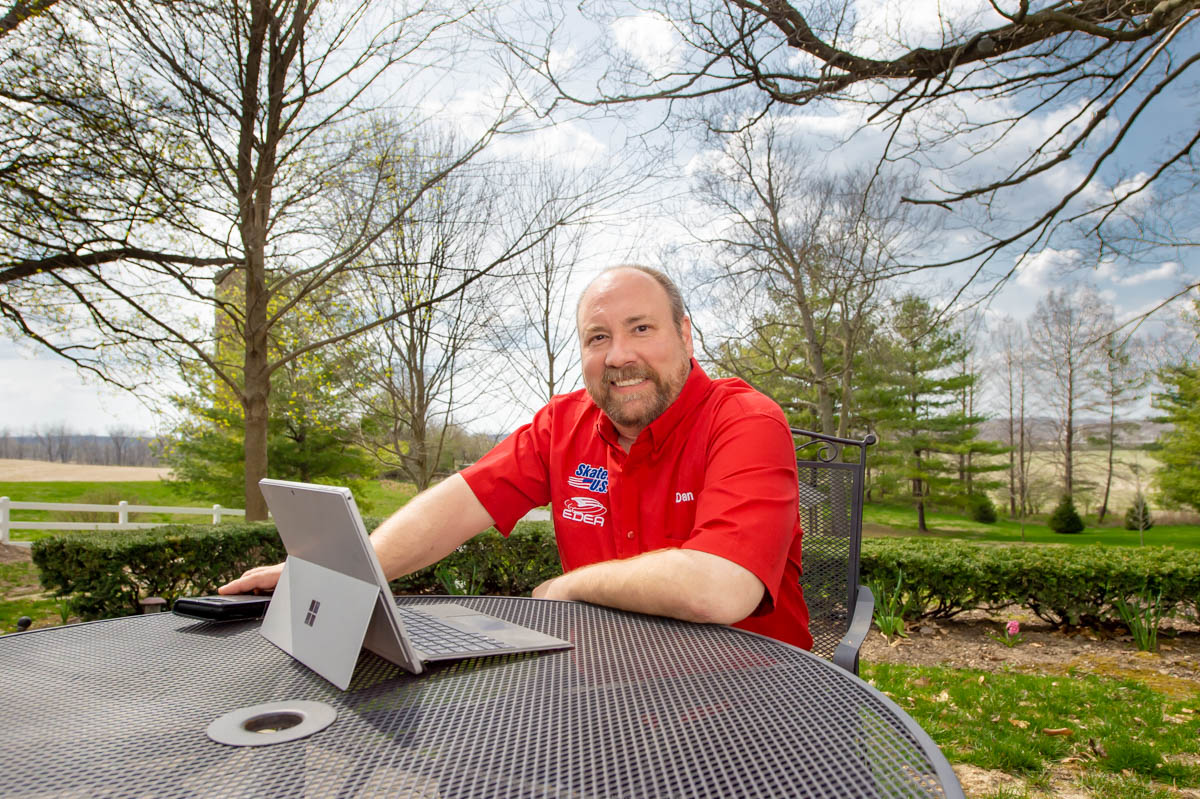 In October of 2018 Dan Walden came to work at Skates U.S. on a newly implemented project that became an important, on-going process for Skates U.S.  Dan’s leadership on this project led to him becoming a permanent member of the Skates U.S. staff and he was quickly promoted to our Operations Manager.

Dan, his wife Paula, and his two teenage children have known David and Carolyn Ripp for several years. Their mutual love of all things music, including the recording aspect, has led to a lasting friendship between all of them.

Dan and his family also enjoy spending time outside. They are very involved with the Boy Scouts and other organizations that involve similar activities. Their family also does not hesitate to volunteer for organization(s) that have a need for additional manual laborers. And if you were to ask Dan where his favorite place is to be, he would assuredly answer, “With my family and if we’re cruising in the houseboat on the lake in the summer sun, so much the better!”

Dan is the kind of person who can build, weld, plumb, electrify or repair almost anything. He can “build something from nothing!” is a common saying at Skates U.S.  We are certain that if you gave Dan some straws and paper clips, and maybe some glue, but definitely a roll of duct tape- then Dan could build you a house!

Many operational procedures have been improved, standardized, and become policy because of Dan’s ability to see the bigger picture in his work and in this company. He is the man that keeps the day-to-day work moving as smoothly as possible- all to the benefit of the customers 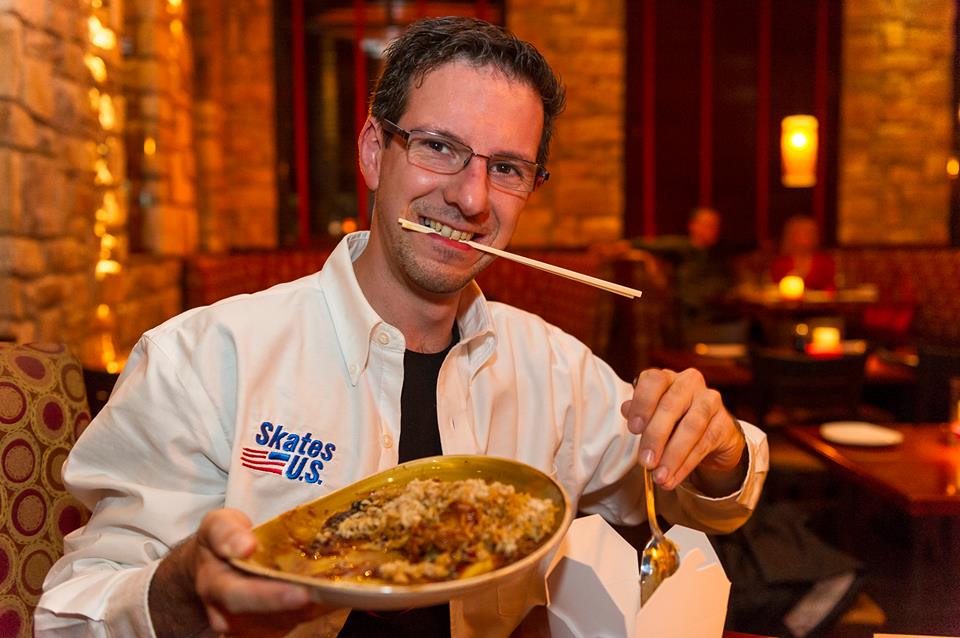 Traveling often from his hometown in Toscana, Italia, Flavio works as a liaison between EDEA Skates in Italy and Skates U.S. in Richmond.  Flavio’s passion is working with the skaters and capturing their love for the sport through the lens of a camera. Flavio spends much of his time photographing the skaters, skating events, and helping with sales and marketing efforts at events all over the world.

Flavio is an absolutely incredible photographer for both ice and roller, including action shots, video, and more!  As he has past experience as an ice coach in Italy, he knows and understands the sport completely in order to achieve the best vantage points!

In addition to his photography expertise, Flavio also specializes in educating skaters and coaches in all features and benefits of EDEA, as he thoroughly knows the EDEA Skate product line inside and out! 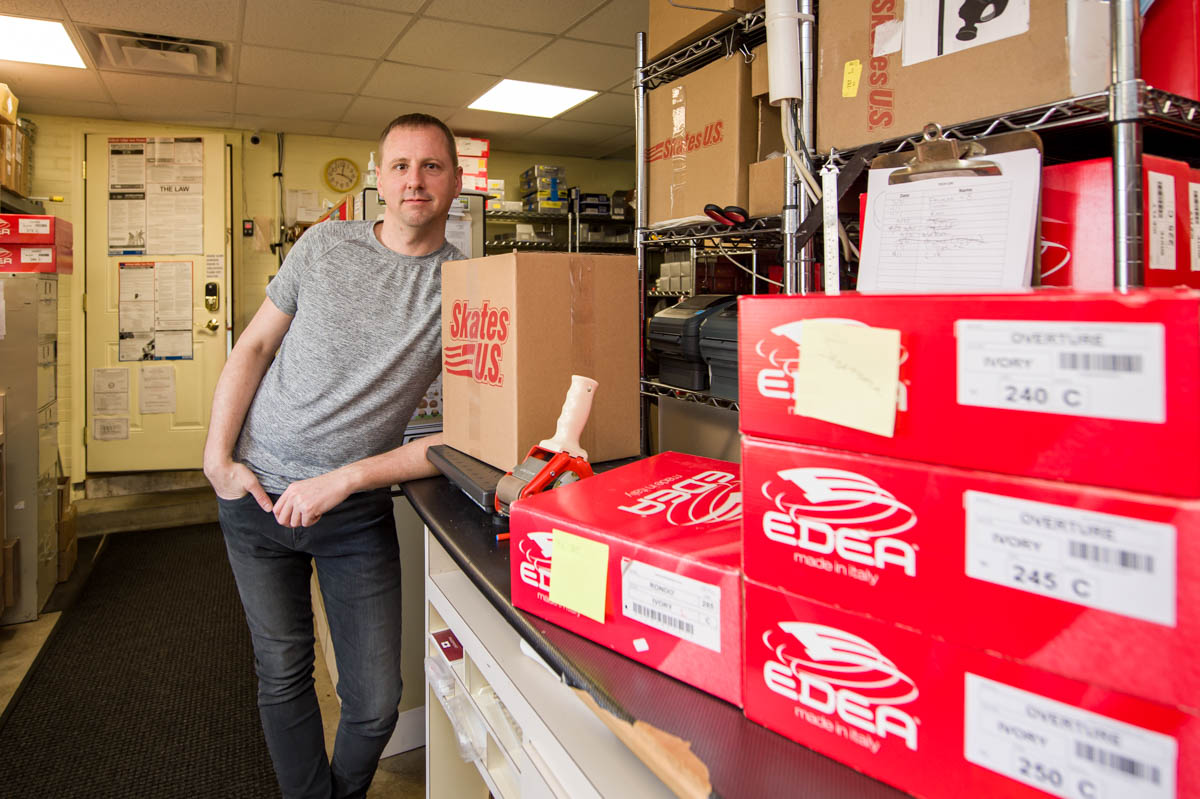 Skates U.S. invited Sean Campbell to our team in June of 2019 and he began work as the director of the shipping department on July 1 of that year. Sean has brought a very varied skill set to Skates U.S. and he enhances our company every day.

Sean enjoys outdoor activities, especially in the summertime. Many days Sean can be found kayaking down a river in the bright sunshine. He has even kayaked in the ocean during his annual vacation trips to Hawaii.

At work Sean is the voice of Skates U.S. as he is the man answering the many phone calls the company receives each day. His understanding of the EDEA and Roll-Line products provides confidence to any Authorized Dealer or skater who call the company. Sean has been a lead in transforming our day-to-day operations so that Skates U.S. may provide the absolute best service to its customers. And any time we have an IT issue, Sean will usually be the first person who is asked for assistance. Skates U.S. is fortunate to have such a learned person who is willing to help his co-workers all while he works so diligently managing the shipping department. 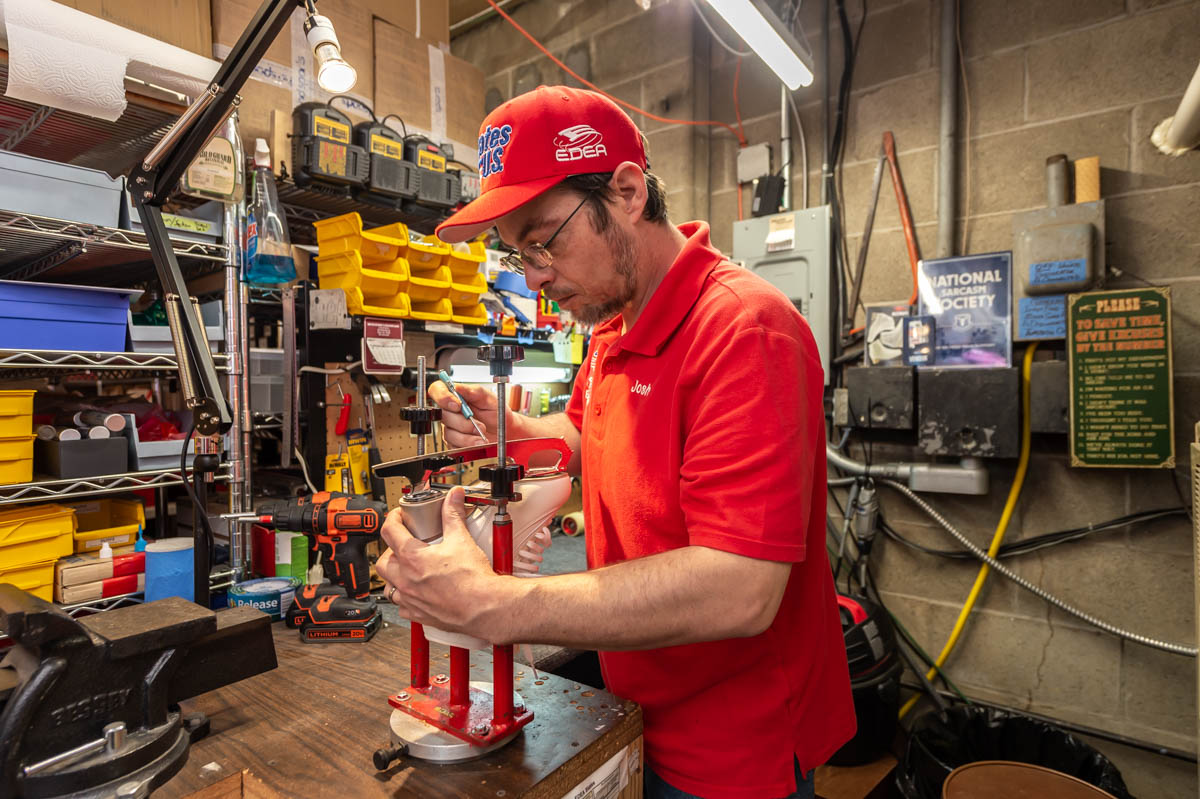 The longest employment record at Skates U.S. is held by our Lead Tech, Josh Schuyler. He began his work at Skates U.S. while he was working on a maintenance project for the family. Josh was asked to come work for the company full time and as the saying goes, “The rest is history!”.

Josh started with many physical labor projects at Skates U.S.; learned the logistics of planning and packing for the elite skating events; and was eventually trained to be a Skate Tech. Over the years, Josh has worked with every department of the business enough to have acquired a good overall understanding of each department and its processes. Josh is a good resource for each of us when we need assistance or have a question about a process.

Josh’s personal interests involves all things sports. He was raised up in a family business that involved the collecting and trading side of sports. Josh has personally met many sports figures whose names most people would recognize as an icon in sports. At any given minute, Josh is prepared to intelligentially discuss the most recent game situation or results in most any sport.

And anyone who understands Josh knows that baseball, especially the Cincinnati Reds, will always be his favorite.

At Skates U.S. Josh is considered the Lead Tech, as his many years here and his mounting and shaping of tens of thousands of pairs of EDEA Boots, has given him the most experience in the tech department. Any Ice or Roller Skater can be confident in the tech services provided by Josh. 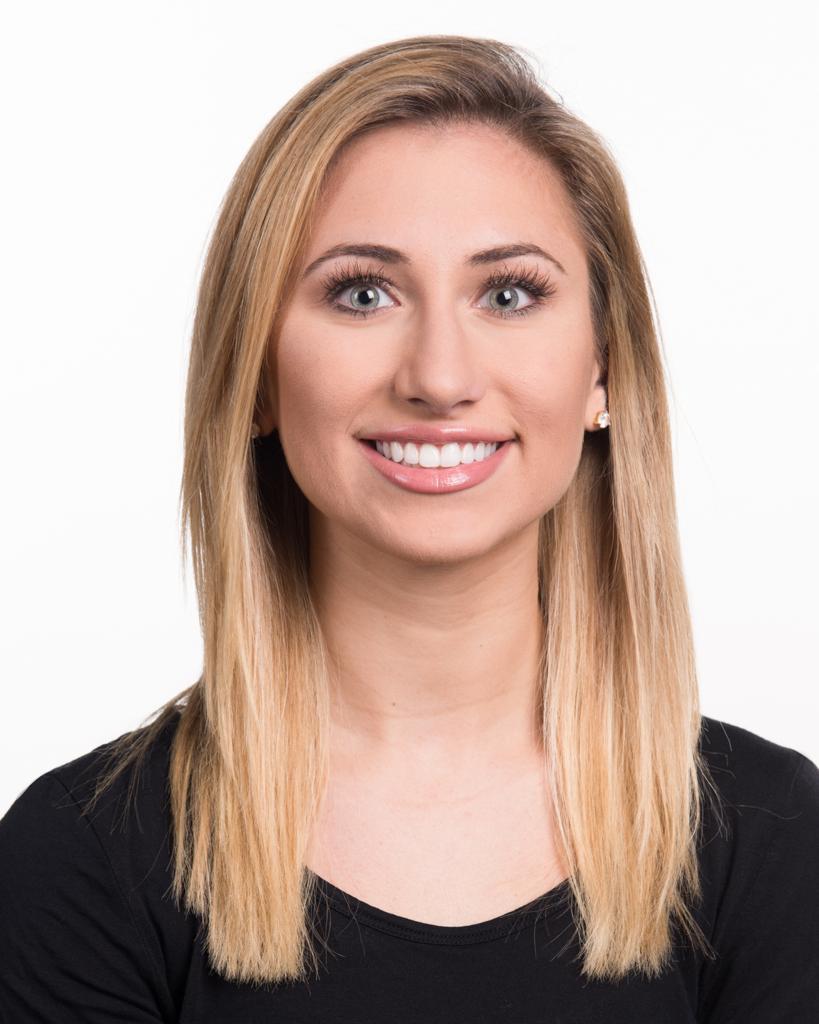 Abby Kimmelman is the Social Media Director at Skates U.S. and she became a part of our team via the world of ice skating. Abby grew up ice skating and competing in the Tri-State area, North Atlantic Regionals. She was a USFS National Championship competitor at the Junior and Senior levels. Abby was a Regional Champion in Ladies Figure Skating.

Post-graduation Abby joined the cast of Disney on Ice as a principal skater, playing the role of Anna from “Disney’s Frozen”. She traveled the world for four years skating in the role of Anna. Even as Abby works for Skates U.S., she is continuing her career as a professional skater/soloist.

Abby also travels to major ice and roller skating events with Skates U.S., helping to not only promote the EDEA and Roll-Line brands, but assisting with skaters and encouraging them in their skating careers. 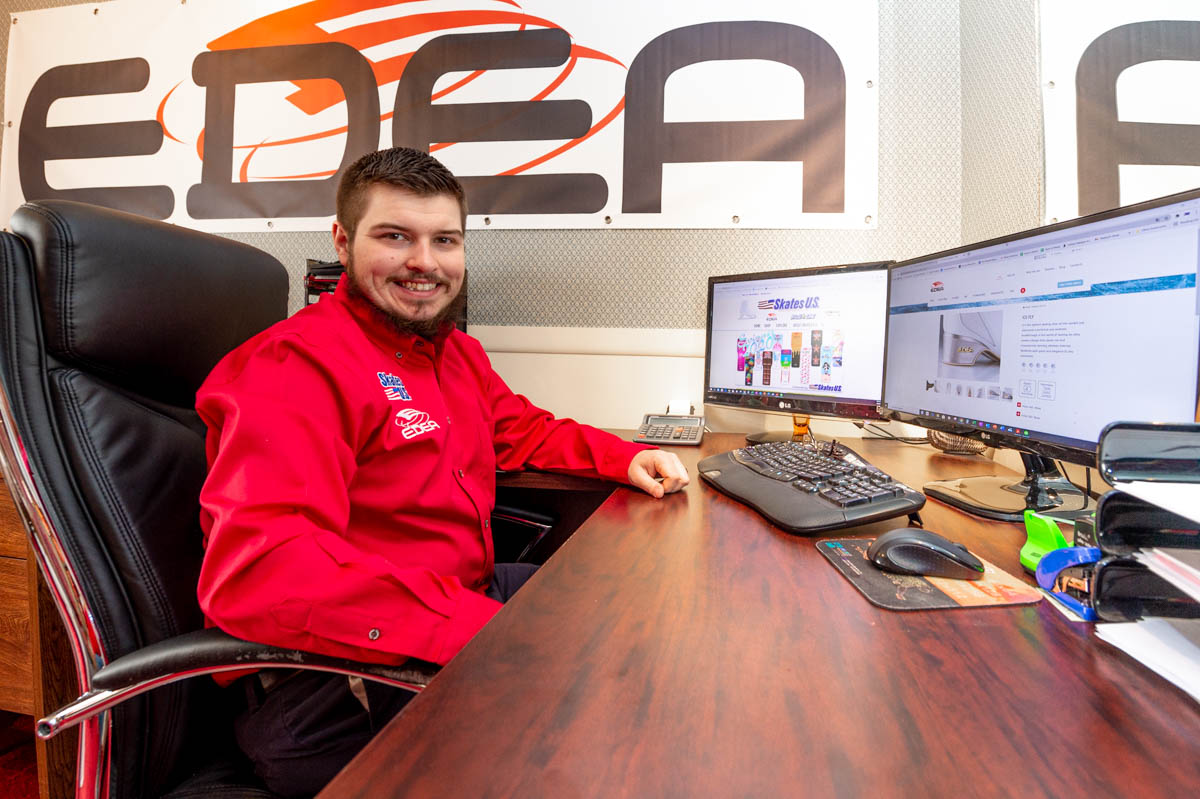 Paul Bachner joined the team at Skates U.S. as the new accountant. He graduated from Robert Morris University in Pittsburgh with a Bachelor’s and a Master’s Degree. Skates U.S. is very fortunate to have such a skilled accountant working with us.

After his graduation in 2020, Paul moved from Pittsburgh to Indiana to start a family with his wife. Paul and Taylor spend their spare time working on their fixer-upper log cabin in the woods. They both enjoy the time afforded them to be surrounded by nature and their animals. So far, their small farm has ducks, chickens, rabbits and dogs. Paul says there will probably be more animals added to their farm.