When U.S. national champion figure skater Gracie Gold takes the ice at the Sochi Olympics, she’ll be wearing a pair of skates purchased through a Richmond company.

Skates US on West Eaton Pike has been Gold’s source for skates for more than six years. The company also fits and builds skates for three-time world champion Patrick Chan of Canada’s Olympic team.

President David Ripp has a long history in skating. His grandfather, Charles Snyder, had a skate shop in Dayton, Ohio, and built skates for Ripp’s mother, a competitive roller skater.

“I started skating before I was 1 (year old),” Ripp said. “I won my first regional competition at 5 and first national competition at 9.” Altogether, he won 13 first-, second- and third-place awards at the North American Championships in roller skating.

He also met his wife of 42 years, Carolyn Duning Ripp of Richmond, while the two were roller skating in Dayton.

For many years, David Ripp was a sound engineer, creating sound systems for more than 650 roller rinks and 350 night clubs as well as editing music for skaters’ performances. He still does some sound work, but most of his time is taken up with skates.

In 2004, the Ripps bought a business that was the U.S. distributor for two Italian roller skate companies, Atlas and Roll-Line. While in Italy to finalize contracts with those companies, they also met with the founder of Edea, a young company manufacturing roller and ice skates. 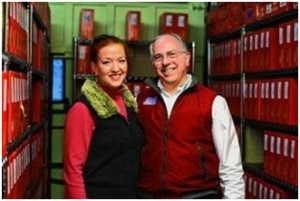 Skates US became the exclusive United States importer and distributor for Edea.

The boots for Edea skates have a carbon fiber shell lined with memory foam and an anti-shock undersole. They are designed to keep their shape and protect the skater from injury.

“That’s why … many of the top skaters have headed to our skates,” said David Ripp.

Skates US has a growing reputation among competitive figure skaters.

Gold (and her twin sister, Carly, also a figure skater) and Chan have been loyal clients, and the Ripps have gotten to know them over the years.

Chan, who trains in the United States, “is a little more reserved, but he is just as focused as Gracie is,” said David Ripp. “And yet, he’s just a really nice guy.”

Watching Gold and Chan on the ice is “really just like watching your own kids,” David Ripp said.

“Being skaters, we know what it takes to do it,” said David Ripp. “You kind of skate with them.”

That connection is evident when David Ripp meets with a new client. Luke Anderson, 11, was in town with his mother recently to be fitted for a pair of ice skates. The family is from St. Louis and had come to Indianapolis for a gymnastics meet in which Luke’s younger brother was competing.

Luke has been figure skating for six years.

David Ripp quickly established a rapport with Luke and his mother, an ease of communication based on similar experience, jargon and technical expertise.

While David works with the skaters, Carolyn Ripp’s role in the company is what she calls “the cheerleader.”

“I see the overall picture,” she said.

The company operates out of a farmhouse her grandfather bought. Now several rooms hold inventory, offices and a work area for shaping boots and mounting blades or rollers.

“I’m just glad we had the house and the room,” said Carolyn Ripp, who handles marketing, human resources and a long, ever-changing list of other duties.

The company works with about 400 dealers around the country and also does direct sales online, by phone or, as in Luke’s case, in a corner of the house.

Edea skates aren’t designed for beginners, but for competitors. They range in price from $600 to $2,000.

Skates US has six full-time employees, including the Ripps.

Josh Schuyler calls himself the “shop tech.” He’s been at the job for two years, coming in with no experience whatsoever. David Ripp taught him.

In January, Schuyler went with David Ripp to the U.S. National Figure Skating Championships in Boston.

“We were actually in the arena when Gracie Gold skated,” Schuyler said. He had mounted Gold’s skates.

How did that make him feel?

“I’m happy to see that they have a boot on that they’re happy with,” he said. “It’s not about me. It’s about the skaters.”