The Piano is the latest step in skating technology, minimizing the impacts and maximizing your safety. It gives more stability, allows for great power transfer, and quicker movements. 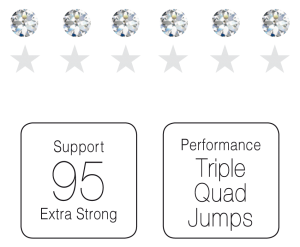 “Like new” Edea boots with minimal wear. Boots have been minimally altered or slightly worn. All have been drilled or pre-drilled for mounting. Boots are structurally sound, but may possess minor cosmetic inconsistencies. All sales are final. No returns accepted.

Pictures may not be an accurate representation of listed model.

Why play the Piano?

The new design with its 7 openings (7 notes) and extra stitching both add additional support. The power generated by the skater is transmitted better to the blade, making the skate react quicker to each push. This gives you improved thrust and more control when skating.

The Piano has been ergonomically designed to the curve of the foot, giving the skater a better feel and more control over their movements while also reducing strain.

This system:
• Minimizes impact shocks that cause muscular-skeletal degeneration and injuries through over-training; increases the amount of force absorbed by the boot on landing thus reducing the strain on the knees and ankles.

• Absorbs ice chatter which makes skating feel smoother and gives more stability. It also gives you a firmer base to jump from allowing you to jump higher and farther.
• Reduces the wobble on landing allowing the skater to execute quicker jumps and transitions thus improving ice speed and stability.

The boot structure has been reinforced using stronger materials. The new design with its 7 openings (7 notes) and extra stitching both add additional support.

This design allows greater transfer of power, giving you improved thrust and more control when skating.

The unique insole made with fiberglass and nylon allows more power transmission and increases the stability.

Its revolutionary design also allows EDEA to reduce the thickness of the sole thus lowering the center of gravity and giving the skater even greater control and stability.

The unique heel design adds further stability to the boot. The curve on the heel increases weight distribution, allowing the heel to be in contact with over half of the insole, giving the skater a sense of oneness with the ice.

The increased control and sensitivity combine to allow the skater to perform the most technical routines and moves.

Our designers have used a combination of microfiber and mesh to revolutionize this boot. Light and strong, it offers both strength and flexibility. The 7 openings recall the 7 notes and the keyboard of a piano.

EDEA have increased the slant of the foot bed. This shortens the reaction time as the foot is already in position allowing the skaters to be more fluid in their movements as they prepare for jumps.

Piano is different from any other boot on the market. To get the maximum from the Piano, skaters should be used to wearing boots that have the same stiffness (e.g. Ice Fly) in order to guarantee a short break-in period and to avoid strain injuries.

Lacing
Double stitching provides the boots with extra strength across the lacing area ensuring greater accuracy and feel in lacing.

Piano has EDEA’s patented hooks and hook position meaning the laces can hold the boots without the need to strangle the leg. A lace puller will make getting on the ice quicker and help keep the boots pristine by making unlacing easier so the tongue can sit properly when the boots are not in use.

Because of the thinner sole our boots have a lower profile. This means we’ve been able to add an extra couple of millimeters of room for the toes for added comfort while retaining our lower profile.

As well as the two anti-shock layers that run through the boot, Piano has a revolutionary inner sole with an anti-shock heel insert that reduces the strain on the body.
Padded

The Piano is padded with our top of the range AIR TECH lining offering greater comfort and support. There is additional padding at the ankle for comfort and to hold the heel in place more firmly giving a better foot position.

Extra padding on the boot edges helps protect the leg while increasing the range of movement. This allows the skater to move and point their toes adding elegance to the performance. The padding is also perforated for added ventilation, allowing the outer shell and inner lining to dry quickly when not in use.

All EDEA skates are designed around the foot with curves and strength to hold the heel in place, to support the foot and give the best fit and maximum comfort. The Piano is our most technologically advanced boot. Innovative design means the skates are more responsive to power giving the skater both increased acceleration and control.

The micro-perforated air tech lining is anti-allergic, anti-bacterial, and dries rapidly ensuring your boots are fresh for the next session.
Tongue

The tongue is key in any boot. In the Piano the tongue gives the increased flexibility required by skaters at this top level. Its anatomical shape helps the leg bend in jumps while additional padding increases the comfort.

Multiple tongue tabs also help to control the tongue position lifting it away from the toes giving the boot a better fit.

Instant Custom Fit
Anatomically designed with memory foam lining, our boots are significantly more comfortable than old fashioned ones. The thermal shell is heat adjustable so every boot can have the bespoke fit that skaters at this level need.

Our hi-tech soles are made with ultra modern material making the boot light and waterproof– just what skaters need.

The Piano is designed to be light. By using a combination of microfiber and mesh EDEA designers have been able to keep the strength while increasing flexibility to add greater fluidity to movements on the ice. The use of hi-tech material means that the Piano is suitable for Vegans.

In a sport where style and grace can be the difference between winning and losing, EDEA have added extra style to the Piano with six crystals added for the final touch of elegance.

All our models use a special double helix screw fixed through pre-drilled holes to fix the blades. They are designed to hold the blades more firmly and for longer than old methods, making skating safer and more fun.

Designed and Made in Italy

Everything at EDEA is done at our factory in a little village at the foot of the Alps. This means we can control design, quality and production. You buy our boots knowing they’ve been cared for from the drawing board until they are placed in the box to be sent to the shops.

SkatesUS.com is providing the opportunity to have a completed EDEA Skate Outfit including the top Ice Blades appropriately used at this level.  All of these Custom High Level EDEA Skate Outfits will take about one week, as not all of the Blades are kept in stock.  It is highly recommended to use this time make sure that the fit of the EDEA Skate is proper prior to any Mounting of the Blade or “Shaping” of the Boot.

When the EDEA Skate Outfit is paid for, SkatesUS.com will ship the EDEA Skates to verify the correct size and then we will cover the cost of the return shipping after trying on the EDEA Skates prior to mounting the Blades and complete the very high level, high performance EDEA Skate Outfit.  For more details on this service see the SkatesUS.com Boot Sizing Policy (which is only valid in the United States).  Once the Blade is Mounted or the Boot is “Shaped,” the Skates are no longer considered New and CANNOT be Returned.  All International orders are final, once paid for and shipped.

The EDEA Skate Complete Outfit is only returnable if the items are in new, unused condition, meaning they have not been shaped or mounted prior to return. We highly recommend confirming correct size before ordering the items to be mounted. Please refer to the SkatesUS.com Boot Sizing Policy listed under our Terms & Conditions of site for more information.

Remember with EDEA Skates, the Carbon Fibre type material is not like leather and will not just change shape on its own.  If something pressures, it will always pressure, until it is adjusted and then once the Skate is adjusted, it will not pressure and will stay that way unless it is changed again.  When we are “Shaping” the Skate, we are “Shaping” the shell or structure of the Skate.  Once it hardens into the new shape, it will stay that way until changed again.

The best way for us to work on the Skates, is of course to have the Skater’s feet to put into the Skates and find out where the pressure points are.
If that is not possible, please trace the foot on a piece of paper and mail (yes, snail mail) or put good measurements on the drawings in mm or inches.  When a drawing is scanned or faxed, it is scaled and makes a good reference, but is not accurate for measurements.  The second part of this is to take some digital pictures of the feet and E-Mail them to OrderDesk@SkatesUS.com and to Info@SkatesUS.com.  Pictures will help us to visualize the issues, but the drawings with measurements are essential.

SkatesUS.com is also providing (if selected) the custom Mounting Services to complete your very high level, high performance EDEA Skate Outfit.  We will complete a Temporary Mount by properly installing the Screws in the Blade Slots, based on the normal Center of Balance.

Once you have received your Skates and work with your Coach to ensure proper positiong of the Blade for your body and build.  Adjustments can be made by slightly loosening the screws and sliding the Blade on the slots, as needed.  Once the Blade positioning is completed and tightened, it is time to install ALL of the remaining Flat Head (CounterSunk) Special EDEA Screws.  These screws are installed by using the INCLUDED 2.0mm (5/64″) Drill Bit Extender.  By using the Drill Bit Extender, the additional screws can be installed without removing the Blade or danger of hitting the drill chuck on the Blade.

The EDEA Skates Nylon Fibreglass Composite FootBed will hold the Special EDEA flat tipped, high-low thread Screws with several times the foot-pound torque than that of a standard sheet metal screw into a leather and cork sole of a traditional leather boot.  The EDEA Skate does not require any additional water-proofing and the rubber coated FootBed of the EDEA Skates will not get water logged and allow the screws to loosen and fall out.  EDEA Skates are much safer due to these innovations.

The easy steps to complete the mount are:
1.  Remove the InnerSole.
2.  With the INCLUDED 2.0mm (5/64′) Drill Bit Extender, drill the center pilot hole in the Center of each of the Countersink screw locations.
3.  In the Sole of the Skate Drill ALL the way through the Sole.
4.  in the Heel of the Skate Drill to the Void in the Heel.
5.  Install the appropriate Special EDEA flat head Screws into the holes with a #2 Phillips Screw Driver.
6.  With a straight blade Screw Driver or chisel, on the inside FootBed of the Skate, remove the drill trails (shavings).
7.  Re-Install the InnerSole.
8.  Put the Skates back on.
9.  Enjoy Skating in EDEA Skates!!!