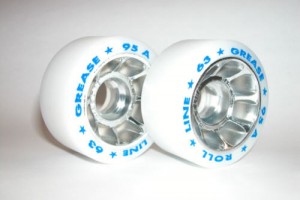 The Roll-Line Urethane wheels, are incredible wheels which utilize Large, very Strong, & Lightweight Hub. This hub provides a thinner Tire Tread or wheel compound, similar in concept to a Low Rider tire on your car, and provides great GRIP and incredible ROLL, because there is very little or no Tread Compression, of the Urethane material as it heats up from friction with the Skating surface.

This combination of a very good Gripping wheel Compound, and a large Hub that provides the ROLL, and gives the Roll-Line Urethane Dance, FreeStyle, Hockey, Speed, or General Purpose wheels with wonderful characteristics of very Good Grip and Great Roll and a bonus of being Lightweight!!!

The Wheels have 2 numbers on them that count.

1. The Wheel Hardness is measured on the Shore scale:

Either on the “D” scale or the “A” scale

“D” scales are for hardnesses of Plastic Compound Wheels

“A” scales are for hardnesses of Urethane Compound Wheels

2. The Wheel Diameter is measured in millimeters

55mm and 57mm are used for FreeStyle skating, primarily. (the 55mm are based on a lowering of the center of gravity)

63mm are used for Dance Wheels, Derby and General Skating

63mm are used for the LARGE Figure Circles

60mm are used for LOOPS

Most of the Roll-Line wheels, including the Grease wheels, offset the mounting of the bearings to the inside of the wheels, just a little more than some other wheels. This does provide a wider stance, which could be considered to help with stability like the old Pontiac Wide Tracking. Roll-Line Wheels have a little more space between the Bearings, when seated in a Wheel. The wider spacing is the same as the wheels of yesteryear. This allows for a little more stability within the bearings and not quite as much rotational torque, thus providing more roll than with the bearings spaced closer together.

Roll-Line believes in limiting the width of Wheel tread that contacts the Skating Surface, because too much wheel will cut down on the ROLL of the wheel. The use of a large light weight hub helps greatly with also increasing the Roll of the wheel. A large hub with a thinner tread minimizes the tire (or tread) compression that happens with most all Urethane wheels as they age a bit and works like a low rider tire on a car. Some Urethane Wheels have much more thickness (or tread) with a very small Hub, if any and after a time loose some of their Roll because of the heating from friction with the Skating surface and compression of the Urethane. Roll-Line uses a grippy Urethane compound in combination with the large hub, which produces a wheel with an unusual combination of Great Grip and Super Roll.

Some of the low and mid level (and even some supposed high level) wheels come NEW with grooves in them, because as a part of the manufacturing process, they need to trim or clean up the wheel surface, so they lathe them, leaving the grooves. It also looks cool.

Grooves are not really such a good thing, as you are only skating on the tops of the grooves, or about 40% of the wheel surface. You actually get much better grip when you have more wheel surface contacting the skating surface. When the wheels are Bald, they are really performing the way they are supposed to.

As some wheel (especially the less expensive wheels) compounds age , they continue over time to cure or get HARDER. This harder result produces a wheel, which feels more slippery even though it has a low Durometer. Grooving a hardened wheel, means less wheel surface area contacting the skating surface and would be EVEN MORE SLIPPERY. 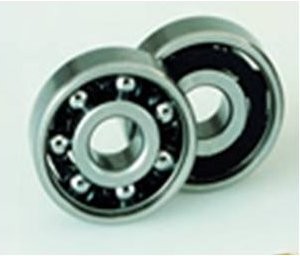 The Carbon J Bearings from Roll-Line are GREAT Bearings

Carbon J Bearings are Custom for Roll-Line and are ABEC 5 bearings.

The Axle Center Bore is 7mm.

The Roll-Line Carbon J Bearings are specifically made for very High Level Competitive Roller Skating. The Carbon J Bearings are Free Rolling with minimal Radial Play which promotes and very evenly distributes the load across the 7 balls for optimal Roll and a good amount of Axial Play or Thrust, which is the side movement of the inner race in relation to the outer race. This movement is very important because when Skaters push, we always put side load on the skate to get power in the push or stroke. If the Bearing does not allow for this, it will bind and LOOSE operating speed or ROLL. These provisions in the Race Curvature and Contact Angle allow the Roll-Line Carbon J Bearings to ROLL very freely

Why Use Spacers in Roller Skate Wheels?

Any Wheel with Bearings, when properly installed on Skate Axles, should use Spacers.

Years ago, when we used Jam Nuts instead of the Nylon inserted Lock Nuts used today. A Jam Nut must be locked down to keep from loosening and coming off. To achieve good Roll from this type of configuration, the sides of the spacer must be absolutely parallel, without any burrs and just a couple of thousandths of an inch wider than the web (that smaller center portion) of the wheel or space between the Bearings. The sizes of the web of the Wheels vary between manufacturers and even between various wheels from the same manufacturer, in some cases. Once again, years ago, the Wheel manufacturers used to supply the Spacers with the Wheels. When the Axle Nut is tightened down on the wheel (with bearings and a spacer), it creates a solid boss of material (the inner race of the inside Bearing, the Spacer, and the inner race of the outside Bearing) that effectively increases the Axle size from 7mm to approximately 14mm. The increasing of the Axle size greatly reduces the possibility of bending or breaking any Axle. By locking the Bearings and Spacer down, it also assures that the center race of each Bearing is not spinning on the Axle, but that the balls of the Bearings are actually doing the work that they are intended to. Tightening the Axle Nut on a Wheel without a Spacer can severely mis-align the center races of the Bearings to the outer races of the Bearings by compressing the inner races towards the center of the Wheel. The Locked Down approach also requires near perfect alignment of the Wheel bore and the web of the Wheel must have very clean square corners to provide a seat for the outer race of the Bearings.

Today, Lock Nuts are accepted, most Wheel manufacturers do not even supply the Wheel Spacers, and the tolerances on the width of the web of the Wheel are not held as tight as they once were. To my knowledge, ATLAS and Roll-Line are the only ones still making Spacers for Wheels. They normally come with a complete NEW Frame as an accessory. SkatesUS.com does have Spacers available in sets of 8 from Roll-Line. (Just a Note: not every spacer will make every wheel work properly. Sometimes there are spacers that are non-parallel, have a burr, or are just too small to match the web of a specific Wheel.) The spacers have always been a part that the manufacturing cost must be minimized, or for some manufacturers, completely eliminated. They are made from a long tube that is sawn into the Spacers, and the tolerances are not usually as rigorously controlled as on other parts of the Skate. To get the Spacers, Bearings and Wheels to work, means sometimes using multiple Spacers to get a specific wheel to ROLL properly.

When everything goes together well, there should be little to no variation in the speed of a free spinning Wheel (with the Axle Nut (Lock Nut) is just backed off) and when the Axle Nut (Lock Nut) is tightened down. To achieve a Free ROLLING complete set of Wheels in this manner will take time and patience and plenty of Spacers along with a good Bearing Press, like the Roll-Line Bearing Press/Puller.

All Roll-Line Wheels have either a Precision Machined Hub with the Tread adhered to it, or the Wheels are Molded with the Precision Center Hub type of configuration.